Contextualise the iPad AS a Creative, Productive, Educational Device 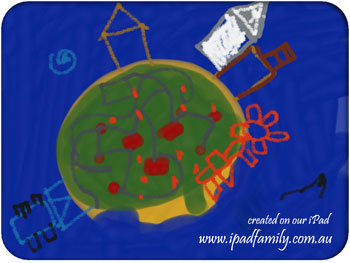 We've found a great way to contextualise having an 'iPad Turn' for the children... and for ourselves. Rather than always getting a 'play' with the iPad, we've categorised the types of turns there are, and ask them what KIND of turn they would like to have...

"Can I have an iPad Turn?" has become an everyday question in our household. In fact, 'iPadturn' is now a NEW WORD in our family vocabulary...   Luckily, we've found a great way to contextualise having an 'iPad Turn' for the children... and for ourselves. Rather than always getting a 'play' with the iPad, we've categorised the types of "turns" there are, and ask them what KIND of turn they would like to have...

The iPad is not games console! Well, maybe it is.

If I was a kid and someone gave me an iPad to 'play with', that's exactly what I'd do.  Play play play play play. Then after a short break, play some more.  I'd play games, games, games... because they're FUN. They offer INSTANT feedback, you feel TOTALLY EMPOWERED, and get to interact in an imaginary world... what's not FUN ABOUT THAT!

So, it's up to us, the parents to give an appropriate 'use' to each iPad turn.

The iPad is NOT for gaming... there are many MANY other things that you can do with the iPad that are just as fun, but offer a more obvious developmental benefit for your kids.  We have found that having this discussion with them allows them to consider what they're using their iPad for.

Research has shown that our brains are (usually) fresher, more alert, and are able to learn new things faster and easier in the morning (after a good night's sleep), than almost any other point in the day.  Therefore, in our family, morning iPad turns are LEARNING, EDUCATIONAL turns.

For our little-one's, ABC songs, counting and word games are an important part of this time.

For our bigger ones, maths, conceptual science, physics and language are commonly covered topics.

It's not necessarily a 'sit down and learn' time, but an open exploration of whichever realms of learning is appropriate at the time.

It is discussion, learning and practice time.

The iPad fits perfectly into this routine, and in many ways enhances both our kid's ability to learn, and OUR ability to have information available for them to learn!

Whether it's a quick visit to Wikipedia to see what kind of kangaroos these are jumping through our garden (lovely morning activity)... or to see how many moons Jupiter has (or that we know it has)... or how fish swim up stream... having the iPad available for learning time has made the a bigger, more immediate difference to education than any bit of technology ever created. Except maybe the pencil, way back when.

Contextualise the iPad AS a Creative, Productive, Educational Device For instance, the drawing to the right was created on my son't iPad after discussing how gravity holds us to the ground.  After a fun discussion, he wanted to have an Artistic iPad turn, and look what he created out of it!  Amazing!

The quality of the iPad itself makes this interaction a delight too.

Since our children see the iPad used as a business tool, an artistic tool, an educational tool AND an entertainment device, it is now easier to contextualise what the device really IS.

May I have an iPad turn?

"What KIND of iPad turn are you thinking of having?" we ask.

"Can I have an ARTISTIC turn?" asks our middle one.

"Can I have a MATHS turn?" asks our eldest.

"Can I have FREE PLAY time?" they still ask too, of course.

Giving a context for their 'turns' makes it easier to distinguish between 'play' and 'learning' on the iPad.  Turns are usually timed, and learning/creative turns are almost always longer than 'game time' turns. It also makes it easier to focus the children on LEARNING as an activity alongside playing and creating... having this context set up.

Maybe this will help you with your 'ipad turns' - enjoy your iPad!

Why Games are Educational (especially for boys)
In her talk, Ali Carr-Chellman pinpoints three reasons boys are tuning out of school in droves, and lays out her bold plan to re-engage them: bringing their culture into the classroom, with new rules that let boys be boys, and video games that teach as well as entertain.

/app-reviews/app-photos/rocketmath1.png
Mathmateer
Learning maths have almost never been so much fun! Read more on the iTunes Store: