Enhance your Artistic Development with iPad

Most so-called 'important' people, in fact most adults, draw like kids. Really. Like eight year olds. And though they know it to be true, they're not willing to admit it. They say 'ooh, I can't draw' or 'not right now' when offered a pencil to sketch something. The reason they draw like a kid is simple, and is easy to overcome with iPad. Brave enough?

Most so-called 'important' people, in fact most adults, draw like kids.  Really.  Like eight year olds. And though they know it to be true, they're not willing to admit it.

They say 'ooh, I can't draw' or 'not right now' when offered a pencil to sketch something.  The reason they draw like a kid is simple, and is easy to overcome with iPad.  Brave enough? 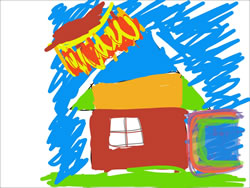 I did a thesis on the 'Artistic Development of Adults' in university.  It was one of the most eye-opening projects I ever did (except for that neat project I did on the Tassie Devil in year 2...but I digress.)

You wouldn't believe it!  The results were astounding.

The 'drawings' were assessed and put into categories.  The categories were firmly based in the obvious features of drawing that correspond to specific level of artistic development.  For instance, putting a square on a line and calling it a house is in the Schematic level of development.  However a 3 dimensional house with a horizon line that is behind the house, is clearly another level of 'artistic' development (visual development), called Dawning Realism.

So, after categorising everyone, it turns out that there were more left handed males and right handed females in the 'highest' level of development.  Okay. I could have probably told you that before going through all the thesis work!  But there was more...

The art students tended to draw 'better' than the english students, but the sculpting students couldn't draw as well as the maths students...  why was that!

What was so astounding?  Well, the artistic development of these young adults corresponded directly to the last time they took an art class, or experimented with drawing on their own.  Full stop.

These 'graduates' were stuck at the level of artistic development they were in because that was the last time they picked up a pencil (or any device) to draw.

Most of these adults would forever draw as 8 year olds... because that was the last time they tried to draw something.   If they only would have continued to draw into high-school, they would have experienced not only a shift in their LEVEL of artistic development (the ability to draw in perspective, shading, new concepts), but they would have ENHANCED developing their ability.   If only everyone had read that thesis, eh!

Why many college graduates (so-called smart-people) draw like kids! 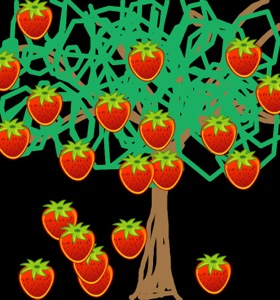 Not because they HAVE TO, but because they're not trying to draw any better.  They're stuck because they say so... not because they've got some art-deficiency!   Really, I've even seen an elephant paint a picture for goodness sake.   Simply start drawing and you'll find you're not as stuck as you say you are!

Why iPad makes this cognitive leap not only possible, but FAST

With an iPad you can take yourself from where you currently ARE (as far as artistic development) to wherever your natural ability takes you.

You get better as you go, and the better you get, the easier it is!  You don't have to 'turn into an artist', but you might find you are one!

As an Art Teacher, I've found this cognitive shift can take hours filled with classroom activities to achieve this expansion, but we've taken adults (and our children) through many of the stages of artistic development WHEN THEY'RE READY, and in a matter of just a few minutes - they've leapt a few 'levels'.   With their iPad you can continue to experiment with this new visual understanding in your own time, in your own space... rather than the next time 'art class' happens to happen!

Experimentation with Art on iPad

With iPad you can experiment with almost ANY medium, any colour, texture, thickness, transparency, you name it!  Like to doodle? ... doodle away, and in a a few years your doodles may be incredible works of art, without you having to do much... or simply nicely advanced, conscious and aesthetic doodles.  The important thing is to keep doodling.

Why you may not do anything about it!

But most people stop.  They judge themselves.  "I draw like a kid!"  And guess what?  You're right, and you will continue to draw like a child until you do something about it.  It's not weight-lifting or rocket-science, but just a line on a page...

Absorb... expand.  Now with iPad you can be your serious-get-things-done-productive-person thing, and enhance your creative development, once it's time to knock-off.

Expand your mind, says my grandfather.  He's 95 and loving it, and I can see that by the expression on his face... from 17000 km away on the other side of the planet, via FaceTime. iPad is amazing for so many reasons... He always said to me, "Keep drawing. Sketch something out on paper (iPad), an idea, an invention.  Use your eyes and your brain and the gift of drawing ideas and you can get any idea across to someone, whether they speak your language or not. Use that."  I will grandfather.   Enjoy your artistic development via iPad!